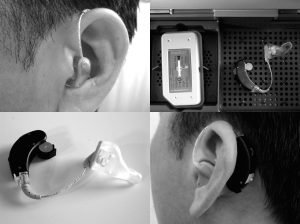 THE HISTORY OF HEARING AIDS

Necessity is the mother of invention, as the saying goes, and those who look back on the evolution of hearing aid design would most likely agree. Large, cumbersome hearing devices don’t mix well with this ever-changing, multi-tasking world we live in — and thanks to major advances in technology, today’s devices are smaller, sleeker-looking and more proficient at mimicking the human sense of hearing than those that were first marketed more than 120 years ago. Let’s take a look at their metamorphosis.

If a cupped hand can boost the volume of sound to your ear, just think what a long, cup-shaped funnel could do. That may have been the inspiration behind the invention of ear trumpets and conversation tubes, non-electric assistive listening devices that have been around since the middle of the 18th century. In fact, a page from Montgomery Ward’s 1894 catalog features illustrations for three different models of ear trumpets and ear tubes, one promising to “suit the most obstinate case of deafness.” 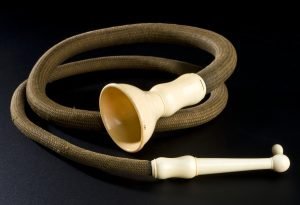 Of course, ear trumpets didn’t really amplify sound — they actually just collected it from the immediate surroundings and dialed it right into the ear canal. As humorous as the cartoon depictions of these devices now appear, they were relatively successful in improving the user’s ability to hear. Here’s why:

Even though ear trumpets and conversation tubes were popular well into the 20th century, the invention of the carbon microphone at the turn of the 20th century ushered in a new hearing aid design.

Then along came the integrated circuit and hearing aid manufacturers found ways to miniaturize the process even further. The microchip paved the way for ear-level hearing aids — those which could now fit discreetly behind the ear. Placing the microphone at ear level helps simulate the natural sound and for the first time, users could wear two devices and achieve bilateral hearing amplification. When the zinc-air battery appeared on the scene in the late 1970s, battery life doubled. Zinc-air batteries are now considered the industry standard, replacing their silver oxide and mercury predecessors.

In the past 60 years, hearing aid design has made its most dramatic changes, and now house powerful, miniaturized circuitry in comfortable and efficient models that are small and discreet. The following types of ear-level hearing aids each have their own benefits depending on the individuals’ severity of hearing loss, lifestyle, and budget.

Today’s hearing aids come in all shapes, sizes, and colors with features as varied as the millions of users who now wear them. Which one is best? Undoubtedly, the one that has been selected for you by a hearing healthcare professional. Together you can identify the manufacturer and model that’s best for you depending upon the severity of your hearing loss, the listening situations you encounter on a daily basis and what you’re able to pay for hearing devices. Ready to start your journey to better hearing health? It all begins with a hearing evaluation. Visit our directory of hearing healthcare professionals to find one in your community.